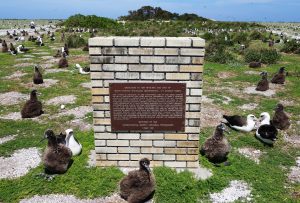 This memorial was constructed in August 1995 by the International Midway Memorial Foundation to honor Major Lofton R. Henderson, whose heroic actions contributed to the United States’ victory in the Battle of Midway on June 4, 1942. In July 1999, the memorial expanded to include plaques honoring the soldiers who fought during the battle. This image is excerpted from a U.S. GAO report:
www.gao.gov/products/GAO-16-382.