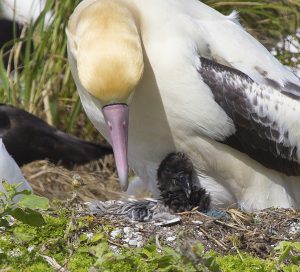 This is the first Short-tailed albatross chick to hatch ever recorded in the United States. It hatched on January 14th, 2011 and the event marked a milestone in the possible conservation of this federally endangered species. This image (taken at a distance with super zoom and cropped) was taken January 19th, 2011. The male and female adults, both banded on Torishima Island off Japan, are taking turns tending the chick and currently switch roles on three day intervals. The male is shown in this image. An incredible occasion and grateful to have been here for the special event. Phoebastria albatrus was listed as an endangered species under the ESA on June 2, 1970. Photo taken at Eastern Island, Midway Atoll National Wildlife Refuge.